Have you every wondered how to pick a lock?

It might not really be a skill you need to master in life. But more a fun skill to have to show off to your friends! However if you are in an emergency situation you will want to call a professional locksmith service like ourselves. But there is no harm in having some fun to!

Want to just watch a video on how to pick a lock instead? We have you covered!

So lets talk about how to use a standard pin (or hair pin) to pick a tumbler lock.

Once you’re done reading you’ll be just the cat burglar in nearly every spy movie ever made. The first thing we need to learn is how these locks work. You’ll want to watch the video in conjunction with reading this guide as learning how to pick a lock is a visual process.

A pin and tumbler lock like the one in the video is the most common type of lock in use today. A series of pins cut at different lengths prevent the barrel of the lock from turning unless each pin is pressed up to the exact right height.

The grooves cut into the key are a unique match, lifting each pin just enough for a split in their centre to align with the edge of the locks barrel allowing it to turn to open this lock without the key. 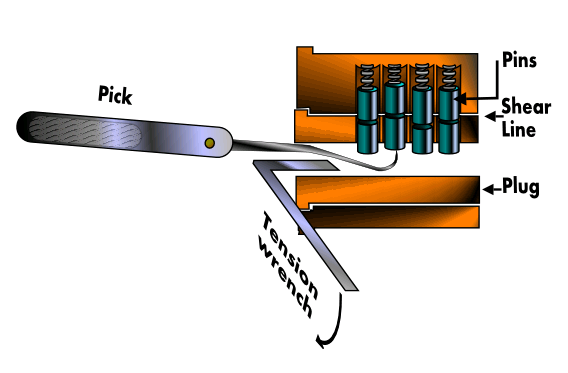 You need to make two simple tools. The actual pick that you use to manipulate the pins and also a small lever that will allow me to apply rotational pressure to the barrel.

To begin with the pick, a hairpin, is bent open until the ends are about 90 degrees apart. The bit of rubber on the straight side of the pin needs to be removed which is pretty easily done with your teeth if there are no tools present the end of the pick now needs a slight bend which can be done by pushing it into the lock itself and applying pressure.

The last improvement that can be made is to bend the other half of the hairpin into a bit of a handle which will make the pick a lot easier to control.

Now making the lever that will turn the lock is extremely simple and just involves bending a pin. So it can be inserted into the keyhole causing pressure on the arm to translate into rotational force on the lock.

Insert the lever into the lower side of the keyhole leaving enough room for the pick to be inserted. The first step is to put tension on the lever with one hand so that the barrel of the lock is under pressure to turn it. Of course you cannot turn because the pins are in the way and cause the barrel to seize but it’s precisely this friction between the pins and the barrel that you’ll be taking advantage of by keeping tension on the barrel.

The pick is inserted and the first thing to notice is that even though the lock is under pressure some of the pins still move up and down freely because of inherent imperfections. 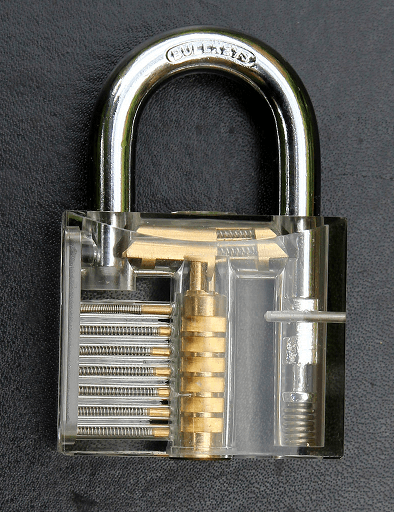 Only one or two pins will ever bind against the barrel at the same time. For now the pins that usually raise and fall can be ignored and our focus should be on finding one that is currently seized.

Seized pins can be identified by feeling each pin with the end of the pick. Then pressing them up slightly and letting them fall again. When we find a seized pin it will behave differently being much harder to push up than the rest assuming you are keeping constant pressure on the lever this whole time.

Once the first seized pin is found which just happens to be the third pin in this lock it is very slowly and carefully forced upwards. Eventually the split in the seized pin will align with the edge of the barrel and there should be a clicking sound. The click is the sound of the barrel suddenly being allowed to rotate forward very slightly before hitting and seizing on one of the other pins.

Since the barrel has been allowed to slightly rotate it prevents the pin we just worked on from falling. And at the same time a new seized pin has been created which can be identified and treated the same as the first.

As each seized pin is successively identified by feeling it with the end of the pick and the tension on it is released by aligning its gap with the edge of the barrel it causes one of the remaining pins to then become seized until every pin has finally been aligned and the lock opens.

If you believe every pin has been dealt with and you find that the lock still does not open there’s a good chance that one of the pins was pressed too high. A gap is above the edge of the locks barrel.

If this happens there’s a chance that reducing the tension on the lever will cause the offending pin to fall into alignment and allow the lock to open but it may also allow other pins to fall which could require starting over.

Practice transparent locks can be purchased online to practice on.

For this skill to be of any use in a real situation though it’s important to be able to identify and adjust seized pins by feel and sound alone. As real locks don’t usually come with transparent sides. If ever!

Both of the tools that I made in this video could also potentially be formed out of a single hairpin by breaking it in half but doing so would not leave enough extra to bend a handle for the pick. That would also result in a lever only half as long because of these things using an individual pin for each tool.

So there you have it!
Make sure you re-read this page a few times and watch the article several times as mastering lock picking is a skill set that can take years.
If you are looking for home security advice then why not read our guide on When to Change Your Locks.

Please note Abacus Locksmiths is not liable for any actions you take based on this information. This information is for informational purposes only. It is your responsibility to understand the law and find out if you are legally allowed to be in possession of lock picking tools.