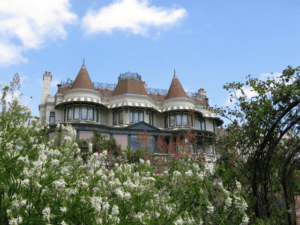 If you’re visiting Bournemouth you don’t want to miss the Russell-Cotes Art Gallery and Museum. The museum not only features a timeless collection of masterworks and special exhibitions, but is a historic building of architectural heritage in and of itself, dating back to 1897. See the photo the the right. Just beautiful isn’t it!

Originally commissioned by Sir Merton Russell Cotes, a former mayor of Bournemouth and designed by the renowned architect John Frederick Fogerty, the building is designed in the Celtic inspired Art-Noveau style, which preceded and partly inspired Art-Deco in the 20th century. Russell-Cotes is also historically exceptional in that it was originally designed with art-exhibition in mind, making it one of the few art museums housed in an a heritage site designed for the purpose that still exhibits many of the original period works its collection.

Sir Russell-Cotes was a strong supporter of female artists of the time, and the museum’s original collection reflects this with portraits by Lady Violet Manners, including a portrait of the famed author and poet Rudyard Kipling, paintings by the pioneering Swiss Neoclassical artist Angelica Kauffmann and sculptures by Lady Kennett Kathleen Shaw.

The founding collection also includes 173 works by Edwin Landseer, known for his animal portraits, historical scenes and sculptures. Particularly noteworthy is his 1860 painting Highland Flood’ which depicts a biblically suggestive gathering of people and animals taking shelter on a cottage roof from a devastating flood in the Scottish Highlands. 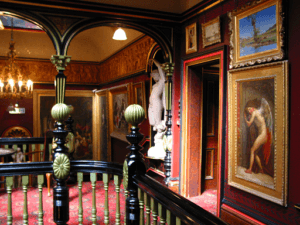 The founding collections reflect Merton Russel-Cotes’ personal tastes, which were strongly traditional and classical. On their travels across the world, Russell-Coates and his wife acquired many local paintings and artifacts including an extensive collection of Japanese Noh masks and ceremonial shrines which are also on display throughout the museum.

They were not supporters of the impressionist movement and no such works were collected by him personally. However, the collections were subsequently expanded to include contemporary art from the post war era and beyond, with an emphasis on local artists from the Bournemouth area, most notably Leslie Moffatt-Ward and his painting A Dorset Landscape, influenced by the Bloomsbury Group, a progressive early 20th century collective that included Roger Fry, who was influenced by post-impressionism.

If you feel daunted by the sprawling collection, there are free guided tours available. There is also a constant rotation of exhibitions, workshops and tours.

Those with a love for plants and ornamental gardening will also appreciate the beautiful lawns, ponds and Japanese-inspired garden outside.

Russell-Cotes Art Museum and Gallery is located at East Cliff promenade, Bournemouth, a five minute walk from the city center, and a 20 minute drive from the airport.

After you visit the Russell Cotes Art Museum and Gallery by not relax at Bournemouth Beach? You’re practically right there anyway!

Read more about our business.