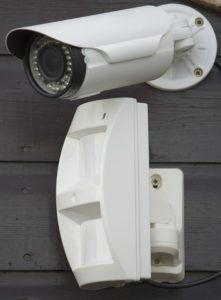 A very strong deterrent for burglars and would be thieves are CCTV cameras. This is what the guardian reported and these statistics are very important for homeowners because it simply means having a security system that’s visually present on the outside of your home could can deter a break-in.

But doesn’t a security system cost a lot of money to install and you have going monthly management fee?

They do but the alternative is to use fake security cameras that are also known as dummy security cameras. You have to be realistic though. There is not going to be any video that would catch anyone in the act of doing anything illegal as your security system is a fake. But the whole point of this is that it’s a deterrent and it’s cheap to setup.

A setup like this in combination with good locks that are installed on your home by a locksmith in Bournemouth can be a great step towards a safer home.

Let’s take a quick look at the Pros and Cons of having a dummy security system installed.

The Pros of a Dummy Security System

The Price –  A fake security system is very cheap. Because you’re essentially buying the outer plastic casing of a camera  and a sometimes a motion sensor. But with no functioning equipment inside. So your investment is going to be quite small.

Easy Installation – Another benefit is the fact dummy security systems are easy to install. There’s no wiring to connect. There is no Wi-Fi to deal with. There is nothing to deal with in an electronic nature other than mounting the fake security cameras on your home with some screws.

Something is Better Than Nothing – Just the fact that a would be break-in artist walks past and sees a security camera increases the chance of them walking by and not trying to break in. Now a more experienced robber might know it’s a fake security camera but more the most part would be robbers will walk away.

The Cons of Dummy Security System

Zero Evidence – If you were to have a break-in you would not have any evidence. When the police come around to ask about the camera footage of the break-in you’re not going to be able to provide it.

In summary if you’re on a budget fake security cameras are better than nothing. If you can afford it buy a real security system.